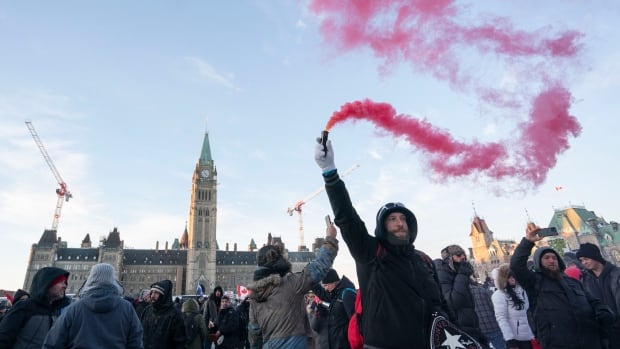 Social media acted as the “central nervous system” of the “Freedom Convoy” protest in Ottawa last winter, the Public Order Emergency Commission heard Tuesday as it considered the role played by misinformation in the lead-up to the invocation of the Emergencies Act.

The commission’s policy phase this week follows six weeks of fact-finding hearings on the events that led to the federal government’s decision to invoke the act to end the convoy protests. Those hearings included testimony about online threats and the role social media played in organizing the protests against COVID-19 public health measures.

Before thousands of trucks started rolling toward Ottawa last January, a loose group of protest organizers communicated mainly over TikTok and Facebook, the commission heard over those weeks of testimony. Many of them had never met in person until the protests began.

“Social media was the central nervous system of the convoy, and exploration of its role crosses numerous domains, such as law, psychology, history, sociology and public policy, to name a few,” Emily Laidlaw, the Canada Research Chair in Cybersecurity Law at the University of Calgary, wrote in a report for the commission.

Social media was used to raise funds, connect organizers and spread their message. It was also used to contrast the accounts of traditional media outlets and provide a different view of what was happening on the ground, Dax D’Orazio, a political scientist and post-doctoral fellow with Queen’s University, testified during an expert panel discussion before the commission Tuesday.

“It was a way of creating meaning, finding community and building, eventually, momentum for social and a political movement,” he said.

The inquiry is seeking expert input to bolster its analysis of whether the government was right to use the Emergencies Act in response to protests that took over downtown Ottawa and halted trade at several border crossings.

The expert testimony will inform Commissioner Paul Rouleau’s recommendations about how to modernize the Emergencies Act and identify other areas for further study. It will also help him and his team study the impact of the purposeful or inadvertent spread of false information during the protest, which was explicitly written into the commission’s mandate.

Experts testified that regulating disinformation is a difficult prospect — especially since it’s not illegal to spread falsehoods.

“It’s lawful but awful,” said Laidlaw during the panel discussion. “For the government to create legislation that targets lawful expression, it likely won’t survive constitutional scrutiny.”

It would be difficult to draft laws that distinguish between the two, said Jonathon Penney, a legal scholar at York University. “It’s a question of intent,” he said.

The panellists also explored the relationship between extremist views and social media, which can provide an echo chamber that serves to confirm people’s existing biases.

People who subscribe to extremist views increasingly turn to “fringe media” instead of taking in news from traditional sources, said David Morin, a national security expert with Sherbrooke University, who spoke to the panel in French.

He said “self-made journalists” associated with those fringe outlets were present in Ottawa during the convoy protest, and produced “alternative information” for viewers.

For example, Morin said, some alternative media sources reported that hundreds of thousands of protesters attended the Ottawa demonstration, when police reports show the true number was far lower.

A second panel on the flow of essential goods and services, critical infrastructure and trade corridors told the commission on Tuesday afternoon that 339,275 jobs depend on the Ambassador Bridge in Windsor, Ont., that protesters blockaded for six days in February, halting trade to the United States.

Those jobs account for 1.8 per cent of all jobs in Canada, according to a report prepared by economist Francois Delorme and economics student Florence Ouellet.

The blockades highlighted the vulnerability of some of Canada’s critical infrastructure, which is governed by a patchwork of government and private sector jurisdictions.

If the federal government hopes to protect critical infrastructure with legislation, it should be very transparent about defining what that is, and what is and isn’t permissible nearby, said Phil Boyle, a legal studies professor at the University of Ottawa. Otherwise, he said, the legislation could be overbroad and used to stifle lawful dissent.

Drawing up a list of what constitutes critical infrastructure could be tricky, though, said Kevin Quigley, a director at the MacEachen Institute for Public Policy and Governance at Dalhousie University.

Different infrastructure is critical to different people at different times, he said, depending on the context. A small bridge that serves as the main route to transport food to a small community could be considered critical on a local scale, for instance.

Ambarish Chandra, an economics professor at the University of Toronto Scarborough, pointed out that when it comes to Canada’s land border crossings, trade is heavily concentrated in southern Ontario.

If something unexpected were to happen there, the effects could be catastrophic for the whole country, he said, adding that Canada could encourage the diversification of trucking networks to make greater use of border crossings in Quebec and in the Prairies.

The inquiry is on a tight timeline to complete its work. Rouleau is expected to submit final recommendations to Parliament at the beginning of February.

TikTok CEO to testify before Congress in March

Home remedy for cellulite removal on thighs you can try now