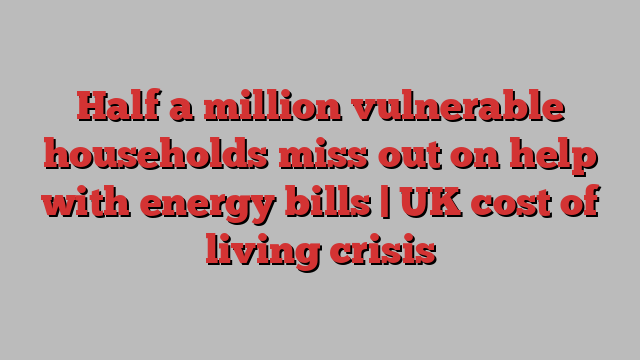 Up to half a million of the UK’s most vulnerable families have been left without government help to pay their energy bills since October, with an estimated 1.3m vouchers for homes with prepayment meters either lost, delayed or unclaimed.

Charities and MPs are calling on ministers to intervene, with Labour saying the government has been warned “time and time again” that those on prepayment meters are not getting enough support.

Households have missed out on an estimated £80m of government help during the two months since the scheme launched, with about 1.3m vouchers not redeemed, according Guardian analysis of data from the top-up company PayPoint and the Department for Business, Energy and Industrial Strategy.

All households in the UK are meant to receive £400 this winter under the energy bills support scheme, which Rishi Sunak announced in February when he was chancellor. Since Russia’s invasion of Ukraine, energy prices have soared, pushing inflation to its highest level in 41 years, causing hardship for millions as the cold weather sets in.

Families who pay by direct debit will receive a credit to their account each month from October to March, without having to do anything. But the 2m homes with traditional prepayment meters – typically the poorest households in the country – should automatically receive a £66 voucher from their supplier in the post, which can be used when topping up.

However, charities are sounding the alarm, saying many homes have not received vouchers. Readers who contacted the Guardian said they had made multiple requests to their energy suppliers asking to be sent vouchers, and in some cases were still waiting.

One mother in London said the delays meant she was unable to heat her home for weeks as mould grew in her 12-year-old son’s bedroom. Other readers in London, Carlisle and Sunderland said they had spent hours on the phone to their energy suppliers trying to find out where their vouchers were. Others living in homes that have been split into studio flats, each with their own sub-meter, said separate households were being forced to share one voucher.

A quarter of the expected vouchers for the first months of the scheme have not been claimed, according to PayPoint, which handles top-up payments for about 750,000 households and shops across the UK. PayPoint said redemptions for October were running at 75%, and November redemptions were running at 63%.

There were 2.1m vouchers due to be delivered to households, according to separate government data published last month. Extrapolating the PayPoint data, this suggests 500,000 households who should have benefited from government help either did not receive or did not redeem their voucher in October, and 760,000 went without in November. In total, 1.3m vouchers worth £84m have not been claimed since the start of the scheme.

The vouchers will expire three months after they are issued, meaning October vouchers will be invalid from 3 January, while November’s expire on 5 February.

Gillian Cooper, the head of energy policy for Citizens Advice, said: “We’re worried that people on prepayment meters – who are at risk of being left in cold, dark homes if they don’t top up – could be missing out on their vouchers.”

Ed Miliband, the shadow secretary of state for climate change and net zero, said the government should intervene to make sure poorer customers do not pay more for energy.

“The government has been warned time and time again that too many households on prepayment meters are not getting the energy bills support they deserve. Yet successive prime ministers have failed to tackle this issue,” he said. “With the cost of living spiralling, the government must end once and for all the unfair penalty premium on prepayment meter users, as Labour has repeatedly called for.”

Matt Copeland, the head of policy and public affairs at the charity National Energy Action (NEA), said the government had been warned that the voucher scheme was likely to result in thousands of households missing out on support. “Unfortunately we saw this coming,” he said. “We knew from past experience that this would happen. Not enough has been done to ensure we have a better outcome.”

Copeland said he believed that some people on prepayment meters may have been holding on to the vouchers until colder weather. However, he said there was low awareness of the scheme, and prepayment meter customers were more likely to be in debt to energy companies, so may well be reluctant to open letters that look like bills and were therefore missing out.

The NEA said 8.4m households could be in fuel poverty from April, when the government’s separate energy price guarantee, which caps the cost of gas and electricity, comes to an end. In his November budget, the chancellor, Jeremy Hunt, announced that the guarantee would rise from April to £3,000 a year for the typical home.

The NEA has asked the government to fund reductions to the standing charges that are applied to prepayment meters regardless of usage. Standing charges can cost about £200 per household, depending on the region.

Steve O’Neill, PayPoint’s corporate affairs and marketing director, said: “We’re still seeing a higher rate of redemptions on November vouchers than those issued in October, despite all vouchers having a three-month validity period. It is advisable that people redeem their oldest vouchers first, in order to lessen the risk of them expiring compared to newer vouchers. If anyone eligible hasn’t yet received their voucher, they should contact their energy supplier as soon as possible.”

Energy UK, the suppliers’ lobby group, advised customers with traditional prepayment meters to check registered contact details and look for any communications from suppliers. The scheme does not apply for those with internet-connected smart prepay meters.

A spokesperson for Energy UK said: “Suppliers are working hard to ensure that their vouchers are reaching customers and will make repeated attempts using the channels and contact details available to them. While there may be different reasons for why a number of vouchers haven’t been redeemed yet, we are looking to help raise awareness of the support available amongst customers by working with outlets like PayPoint and Post Office and consumer groups like Citizens Advice.”

A spokesperson for the business department said: “All energy bills support scheme vouchers for October and November should have been dispatched by suppliers. If customers have not received them, or are having difficulties in redeeming them, they should contact their supplier.

“Suppliers must ensure vouchers reach customers by the 11th working day of the month, and they’re working with Post Office and PayPoint to mitigate postal strikes. Customers can also speak to their supplier if they need a voucher to be reissued.”

European stocks and US futures dip ahead of interest rate decisions

Would YOU accept less anesthetic during your operation to save the planet?