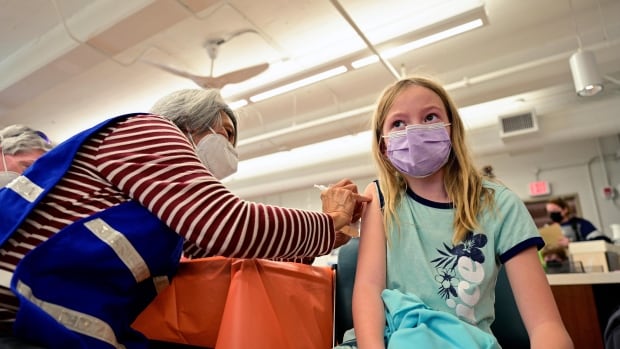 Montreal Public Health has launched a campaign to remind parents to verify their child’s vaccination status, especially for those six and under.

A growing number of kids have yet to be inoculated against dangerous diseases like measles, mumps, whooping cough and rubella, said Benoît Corriveau, a resident doctor with the CIUSSS du Centre-Sud-de-l’Île-de-Montréal.

“It’s around 80 per cent when, for a lot of diseases, we need at least 95 per cent of people to be immunized to have herd immunity to prevent outbreaks from happening,” he said.

This lack of immunity comes at a time when pediatric care is already stretched thin by the overwhelming number of patients.

“Public health is concerned that, on top of the stress that is already on pediatric hospitals and schools, we could also experience outbreaks of other diseases that can be prevented by vaccination, ” said Corriveau.

These diseases can sometimes lead to serious complications for kids, he said. Corriveau said parents can check their child’s vaccination status by calling 811 or going on the city’s public health website. To book appointments, parents can rely on the scheduling website, clicsante and selecting the option: children vaccination.

According to federal data, three cases of measles — and no cases of rubella — have been reported in Canada in 2022. But each year in Canada between 1,000 and 3,000 people fall ill from pertussis, also known as whooping cough.

Mumps outbreaks have cropped up in different parts of the country in recent years.

It says in a news release that, according to its latest estimates, measles vaccination coverage in Montreal is between 80 and 85 per cent among kindergarten-age children — below the target rate of 95 per cent, to prevent transmission of the disease.

The immunization schedule for children six years old and under helps protect against several serious disease complications, including meningitis and polio, the release says.

“It is precisely thanks to vaccination that many of these diseases have almost disappeared in Quebec,” it says. “Vaccines are free, safe and effective in preventing serious complications from these infections.”

Giving the vaccines at the recommended age improves the protection, the health authority says, but it’s never too late to make an appointment.

WHO says issue is global

Vaccination rates have dropped off by several percentage points in some provinces, but Canada isn’t the only country affected by the decline.

The World Health Organization issued a warning over the summer of 2021, saying 23 million children missed out on basic childhood vaccines through routine health services in 2020, the highest number since 2009 and 3.7 million more than in 2019.

“Multiple disease outbreaks would be catastrophic for communities and health systems already battling COVID-19, making it more urgent than ever to invest in childhood vaccination and ensure every child is reached,” said the WHO’s director general, Dr. Tedros Adhanom Ghebreyesus, in a news release.

Then, in August, Dr. Fatima Kakkar, an infectious diseases pediatrician and pediatrics professor at the Université de Montréal, said she was seeing children who have never even had a tetanus shot.

She said it’s “surprising to see how many” are without the protection.

“For the most part, it’s younger children who missed their regular appointments during peak pandemic time and have just never caught up,” she said.

Home remedy for cellulite removal on thighs you can try now

Barrett Strong, Motown hitmaker and co-writer of I Heard It Through The Grapevine, dead at 81