The chief executive of Barclays says he has to do a better job convincing investors of the merit of the investment bank as its share price lags behind rivals.

CS Venkatakrishnan, speaking in his first interview since he announced he would be undergoing treatment for non-Hodgkin lymphoma, said that he needed to do a better job explaining the model of the unit, as well as eliminating self-inflicted scandals at the British bank’s largest division.

Venkat said one reason London-based Barclays suffered from a discount to its US peers was “the degree to which our investors in the UK understand what an investment bank is. That is on us, we have got to explain it better,” he said at the Financial Times Banking Summit on Tuesday.

Earnings at the bank’s advisory and trading division have dramatically improved during extended periods of market volatility caused by Covid and the war in Ukraine, helping push net profit to a record £6.3bn last year.

Most recently, revenues from fixed-income trading doubled in the third quarter and Barclays vaulted struggling Credit Suisse — which is spinning off its advisory unit — to take the number six spot globally in league table rankings.

However, Barclays’ share price has continued to fall. It has lost 20 per cent this year and trades at a 60 per cent discount to the book value of its assets.

While some of this can be blamed on a steep plunge after the Russian invasion — and Capital Group selling £900mn of stock as part of a wider move out of European banks — consumer-focused UK peers such as Lloyds and NatWest have fared better over the same period, despite having less diversified earnings and relying entirely on one country facing a recession.

“As you can imagine this is a question on which my colleagues and I rack our brains about quite a lot . . . Number one there is always a discount attached to an investment banking business because it is considered to be more volatile,” he said. “We can always spend more time explaining how the performance is generated and make it clear why it is sustainable, which we will be doing.”

The chief executive also said a clerical error that caused Barclays to improperly offer for sale $17.7bn of structured financial products was a “deeply, deeply embarrassing moment” that had also had an impact.

“Without doubt what happened with the overissuance of securities this year hurt us because you’ve got to show that not only can you manage an external environment extremely well”, Venkat said. “We need not have had this internal foot fault.”

He also pointed to a “fairly generous” dividend and buyback policy that he planned to continue as incentives to investors.

“Performance is what we control . . . The stock price is the output and I am confident that it will follow,” he said. 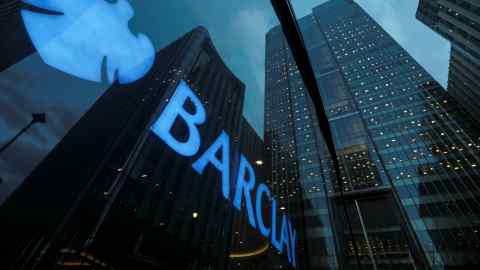 On Monday, Venkat revealed that he would be undergoing treatment for non-Hodgkin lymphoma — a type of blood cancer — for the next 12 to 16 weeks.

“Nobody likes to hear this diagnosis and unfortunately it is all too common,” he said in the interview. My treatment “won’t be a picnic in the park, but it will allow me to be continually and actively engaged in the bank, which is what I’d like in an appropriate way.”

“The advantage of working in a large organisation these days is that we offer a lot to employees, when you go through ups and downs, in sickness and in health, you can rely on your colleagues and institution to help you,” he added. “Now as a personal matter . . . I will be the proof point of this proposition.”

Venkat took over from Jes Staley in November last year after his predecessor was forced to step down amid a UK regulatory probe into his past relationship with Jeffrey Epstein. Staley is appealing against the decision.

Novak Djokovic free to play US Open, will miss Miami and Indian Wells

Reserve Bank warns 800,000 Aussie households are on the verge of a massive interest shock

Decriminalization yet another ‘half measure’ as B.C. confronts full-sized drug crisis, advocates say